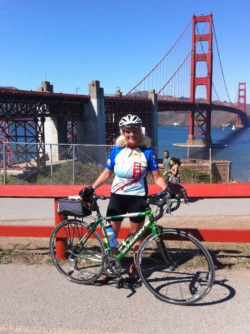 In September 2010, I biked from Fortuna in northern California to the Golden Gate Park in San Francisco.  California's Climate Ride took me 320 miles through some of California's most beautiful scenery with wonderful sunny day.  The ride supported Rails to Trails, 1Sky and Green America.

We started by passing through huge redwood groves. The 2nd day, after having a flat tire caused by a star thistle 5 miles into the ride, I biked over a big hill to the artistic village of Mendocino - one of my late mother's favorite towns (she liked the hat shop!).  After that we meandered down the coast eventually getting to Fort Ross - built by the Russians when people were still looking for furs up and down the West Coast.  I made Fort Ross on time - so no need to take the shuttle  - the coast road gets quite edgy but was very quiet and pleasant to ride. Then I hit the Russian River - over 100 miles from Mendocino to our camp in Duncans Mills.  After that we wandered through wine country and then to another of my mother's favorite stopping places - Point Reyes Station. The last day took us over the Golden Gate Bridge and then we had a short climb over to Golden Gate Park.
I rode as a member of Team Roz, led by ocean rower Roz Savage.  She's spreading her environmental message as she blogs from her ocean-going vessel, rechristened Sedna. We had a blast.  Sponsor Roz on her latest voyage - across the Indian Ocean.
Powered by